Todd Hofford ’96 & ’97 grew up in Ashland and spent many hours working at the historic Mark Antony Hotel while in high school. He started out as a dishwasher and moved on to become the number one chef working for current SOU business professor Dennis Slattery ’96 and MBA ’98, after being trained by world famous Chef Christophe Baudry, who was the Executive Chef at the hotel for several years.

Because of finances, Todd decided it was best to stay home and attend SOU for his college education. After being placed on academic probation as a freshman, he enlisted in the Oregon Air National Guard to help pay for school. His commutes one weekend per month to Kingsley Field in Klamath Falls, not only helped him to solidify paying for school, they motivated him to perform at a high academic level. “After being around fighter jets for a few hours, I asked what I needed to do to become part of this elite team. The answer from pilots and others on the base was basically to get straight ‘As’ in class,” he said. From that point on, he bore down academically and dramatically improved his GPA to a 3.75, graduating magna cum laude, while earning his bachelor’s in business administration in 1996 and his bachelor’s in communication in 1997.

While working part time, Todd took up working on his private pilot’s license.  He also kept in touch with one of his favorite business professors, Dr. George Farrimond, who had served as a navigator in the USAF. On Todd’s behalf, Dr. Farrimond reached out to contacts at Seattle-based Boeing and they made an offer to Todd without even interviewing him. He moved to Seattle and spent his year there paying off his college loans and pilot’s license while working on the Boeing 777 aircraft.

In 1998, Todd earned a slot to attend US Air Force Officer Training School at Maxwell Air Force Base (AFB) in Alabama. He was commissioned as a Second Lieutenant March 12, 1998, then entered a two-year pilot program to earn his wings at Vance AFB in Oklahoma, where only the top ten percent are selected to go to fighter fundamentals school. He made the top ten percent there while earning the Top Dawg Flying Award in his class, then transferred to Randolph AFB near San Antonio, to begin his training in fighters. After successfully finishing that phase of his training, he transferred to Kingsley Field in Klamath Falls to get his F-15 Eagle, training and qualification. By October of 2000, he became a fighter pilot in the 142nd Fighter Wing at the Portland Airbase.

After serving in multiple roles in the 142nd over the years, Todd became the Maintenance Squadron Commander for over two- and one-half years with the responsibility for 21 F-15C aircraft and 255 personnel then became the Maintenance Group Commander. Both positions are crucial for the safety and confidence of the pilots who fly the aircraft that protect the Pacific Northwest. At the Group level of leadership, Todd was focused on more strategic level maintenance initiatives that benefited the entire Combat Air Force, F-15 Eagle community.

In 2017, Todd was promoted to Colonel and he became the Vice Commander of the 142nd Wing in 2018. He also made news worldwide when he became the first fighter pilot in the world to fly an ejection seat airplane after prosthetic cervical disc replacement surgery. “Fighter pilots world-wide endure a lot of stress and strain on their bodies, particularly when pulling Gs. My injury was very common and as many as 25% of fighter pilots have to deal with it. So, I was very blessed to have a great surgeon and physical therapy team to help get me back to flight status,” he said.

Todd has over 27 years of active and guard duty service and served as the Air Component Chief of Staff for the Oregon Air National Guard, working out of the state headquarters in Salem from 2020-2021. On December 5th, 2021, Todd was promoted to command the 142nd Wing at the Portland Air National Guard Base. With the responsibility for 1,400 personnel and $2.2 billion worth of aircraft and equipment, it is one of the most significant leadership positions ever held by a Raider alum. It’s quite a way removed from academic probation his freshman year at SOU.

“My experience staying home at SOU helped shape where I am today. The small town feel and atmosphere can really help people build the confidence to take big steps in life. I loved that I was not a number on campus and could meet a professor outside of designated office hours, or for a beer,” he said. Todd’s leadership philosophy is applicable for anyone aspiring to achieve. As he always says to his Airmen, “It’s not aptitude but attitude, that will get you altitude in life. My attitude has saved the day for me, over and over again. We can all choose every day, to have a good day or a bad day. I tell myself every day, today is a good day, for a good day!” 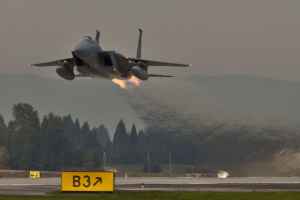 Alumna Becomes the Youngest Master Distiller in the United States